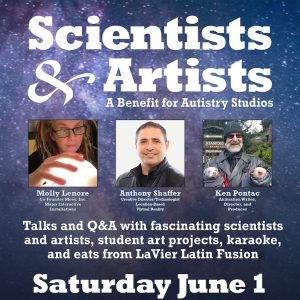 This is a very special event bringing together great minds, special talents, and world class creativity for an evening of powerful sharing.

Each speaker presents their latest work and shares their personal journey providing real-life role models for our community.

* Molly Lenore specializes in conceptual design and creation of media installations and interactive public spaces. Her work, which is both artistic and educational, involves making content engaging, comprehensible, and immersive. Molly has developed and designed work for public spaces, museums, galleries and fellow artists in addition to her experience in the world of interactive television, film and games. She has been recognized and has won numerous international awards for her work.

* Anthony Shafer, Creative Director / Technologist creates Location Based VR Experiences, Augmented Reality Wine Bottles, and Visual Effects for Hollywood blockbuster films. From a young age, Anthony naturally gravitated to computers and filmmaking by spending countless hours behind a Commodore 64 programming and creating short films. Since then he’s worked on the Star Wars prequels, Pirates 2, Transformers for George Lucas. At Disney, he pioneered stereoscopic cinema for animated films and was instrumental in the Michael Jackson Hologram performance. Anthony presented at last year’s Scientist & Artists Party and was such a hit we’ve asked him to return!

* Ken Pontac, our event EMCEE, has been a Migrant Film Worker in the entertainment industry for over thirty years, writing and directing content for television, film, and various new-fangled thinking machines. Pontac has written scripts and dialog for the Marvel Heroes MMO, multiple Sonic the Hedgehog games for Sega, an international hit series featuring the ghost gobbling Pac-Man, Disneys animated action/adventure series Slugterra, the charming pre-school show Octonauts, and the less-than-charming Internet sensation Happy Tree Friends. His cult classic stop-motion series Bump in the Night is available in a new compilation produced by Mill Creek Entertainment.