3 FOR ALL Improv Troupe 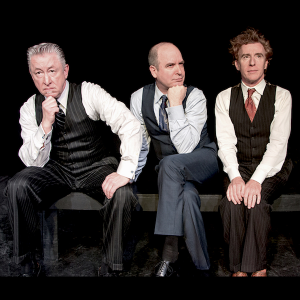 The wildly popular trio is known for their unique blend of intensely dramatic and outrageously funny, completely improvised scenes based on audience suggestions

3 FOR ALL, formed in 1996 by Rafe Chase, Stephen Kearin and Tim Orr, is driven by the artistic principle that the work takes place “on a stage with no rules.”

In their performances, the improvisers hit the stage with no script, no preconceptions and without the underlying structure of most improv formats.

The three actors work together, along with musical and lighting improvisers, to tell both short and full-length stories of all genres which may or may not be related to each other, or based on audience suggestions.

Nothing is rehearsed, nothing discussed before or during the shows, nothing held over or reworked for future shows.

“Sheer Genius. Hilarious. These guys are A Must See.” – Sandy Staggs, SF Observer

3 FOR ALL starred in two improvised feature films, Suckerfish and Security, as well as collaborating on their own completely improvised CD. Individually, their improv expertise is highly sought after for animation inspiration and character development, voice acting, TV characters, teaching and performing improvisation in the United States and internationally.

Individually and as the amazing ensemble 3 FOR ALL, Chase, Kearin and Orr are widely recognized as 3 of the hottest improvisers on the scene today.