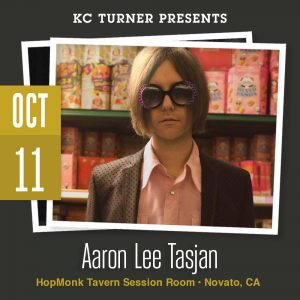 And the New York Times, NPR and Rolling Stone will all gladly corroborate.

But steel yourselves, folk fans, because he’s about to follow his restless muse straight out from under the weight of everyone’s expectations into the kind of glammy, jingle-jangle power-pop-and-psych-tinged sounds he hasn’t dabbled in since his younger days playing lead guitar for a late-period incarnation of The New York Dolls. Back to the pure, blissful unfiltered innocence of falling in love with music for the first time.

Aaron Lee Tasjan says he aims to use his music for good, but he’s no protest singer. And Karma for Cheap isn’t some heavy-handed, didactic political record cramming a set of talking points down anyone’s throat. It’s a finely tuned rock & roll seismograph measuring the dark and uncertain vibrations of the time in which it was created. A cracked mirror reflecting back the American zeitgeist in this foul year of Our Lord, Two Thousand and Eighteen.