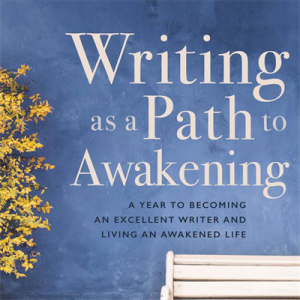 Understand how the practice of writing can be an exploration of consciousness, and a practice toward deeper self-awareness.

He received a BFA in photography from the University of Colorado in 1991 and an MFA in New Genres from the San Francisco Art Institute in 1995. Albert served as Marin County California’s very first Poet Laureate from 2008-2010.

His work has appeared in more than 100 literary journals worldwide including ZYZZYVA, New American Writing, Hanging Loose, Jubilat, Exquisite Corpse, Jacket (Australia), Poetry Kanto (Japan), Van Gogh’s Ear (France), and many others. He is the author of several books of poems including “Letters to Early Street” and “Walking Tooth & Cloud,” and the memoir “Beamish Boy,” which was named a “Best Book of 2012” by Kirkus Reviews.

His most recent work is Writing as a Path to Awakening: A Year to Becoming an Excellent Writer and Living an Awakened Life, based on his popular writing workshops by the same name, published by Sounds True in 2017.

He teaches writing and mindfulness workshops at The Omega Institute, The Esalen Institute, Spirit Rock Meditation Center and literary conferences nationally. He lives in Northern California.

Albert is also a speaker having shared the stage with U.S poet laureate Kay Ryan, Cheryl Strayed, Elizabeth Gilbert, Maxine Hong Kingston and many others.