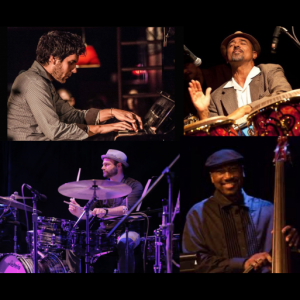 “Throughout history, there are no two other styles of music as oppressed and misunderstood as flamenco and jazz forms are.

With its differences in form, sound, and rhythms, they both share the tears of two communities oppressed by society.

With the concert, we honor both Hispanic and Afro American culture.

With “Descarga for Bud Powell” we want to continue the revival of Black American jazz composers with new arrangements, giving it a flamenco and Latin jazz-infused twist, which makes it new, fresh and apt to reach a more broad audience.”

REVIEWS of the first album in the Descarga Series:

‘‘… Descarga for Monk is a tremendous calling card for Alex Conde as a composer and pianist. But it’s also a demonstration of the adaptability of Latin jazz, as the genre readily accepts Conde’s flamenco influences. Easily recommended to Latin jazz fans, with the added spice of a fresh Spanish flavor.”
— MARK SULLIVAN, ALLABOUTJAZZ

“… When Alex Conde turns up the power at any given time, he’s like an orchestra all by himself. All of this firepower together with Marcus Gilmore, Conrad Herwig, Dayna Stephens, and Luques Curtis makes Descarga a very special experience. Mr. Conde is a pianist whose music is sustained by the fecundity of his Spanish roots. Through it all, of course, Mr. Conde is absolutely thrilling.”
— RAUL DA GAMA, LATIN JAZZ NETWORK

“… Gifted Spanish pianist Alex Conde, has his way with the high priest of bop in an adventurous all-Monk
program.’’
— JAZZ CRITIC BILL MILKOWSKI

‘‘… [Alex’s] Thelonious Monk is rock solid. Its rhapsodic elegance is informed by all of the mystery and majesty of Monkish-ness. The elemental irreverence of Monk-music has been mastered by the young Spaniard. He worships at the altar of originality, as Thelonious Monk did, pouring his twisting duende into
molten chords. His phrases make for lines that erupt with volcanic brilliance and a viscosity that is unlike anything that has been sung of Thelonious Monk in a very long time.”
— RAUL DA GAMA, LATIN JAZZ NETWORK

Tickets for all shows available at www.everybluemoonconcerts.org