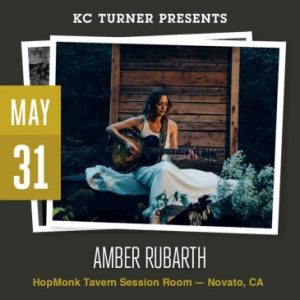 Amber Rubarth has performed her music far and wide, touring solo across South Africa, Europe, Japan, and all throughout America with her “unique gift of knocking down walls with songs so strong they sound like classics from another era.” -Acoustic Guitar Magazine.

She was recently cast alongside Joe Purdy to star in the feature film ‘American Folk’ which won numerous festival awards .

Rubarth left home at 17 years old to become a chainsaw sculptor in Nevada.  At 21, she quit and decided to begin writing songs and teaching herself guitar.  One of her early originals was awarded Grand Prize in NPR’s Mountain Stage New Song contest and led to her recording an album produced by Jacquire King (Tom Waits, Norah Jones).

She has performed hundreds of stages around the world, from the early days opening for a flea circus at a Texas theme park, to performing an original duet with Jason Mraz at Carnegie Hall, to full orchestral arrangements of her songs with the Ithaca Chamber Orchestra woven into classical works.

She moves fluidly between genres, creating a unique palette of instrumentation for what best serves the song.  This fluidity and curiosity has led to her being hand-picked to open for many diverse artists including Emmylou Harris, Kenny Loggins, Richie Havens, Dr. Ralph Stanley and Loudon Wainwright III.