An Evening With T.J. Miller 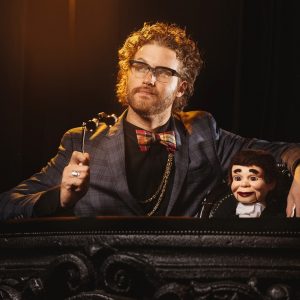 T.J. Miller is one of the most sought after comedians in the world, certainly the northern part of the western hemisphere.

He has been diligently working to make people laugh for over fifteen years, and is driven by the altruistic mission statement that life is fundamentally tragic and the best thing he can do is provide an ephemeral escapism from that tragedy which permeates everyday life by doing comedy.

He has been performing his absurdist observational standup act worldwide for over 15 years, and has never gone to the bathroom in his pantaloons on stage. His hour-long comedy specials T.J. MILLER: NO REAL REASON (Comedy Central) and T.J. MILLER: METICULOUSLY RIDICULOUS (HBO) are available to stream now wherever streaming content is streamed.  (See website for more credits.)

For no reason he produced two music albums, THE EXTENDED PLAY E.P., a hip-hop/pop/folk music E.P. with 41 tracks, and the ILLEGAL ART REMIXTAPE- available now on iTunes and wherever fake music is sold.

He is first and foremost, and always will be, a comedian. His Standup is “Smooth Like Fire, Hip Like Lincoln.”

Next year T.J. can be seen in the upcoming film UNDERWATER opposite Kristin Stewart, a Twentieth Century Fox disaster thriller that is the perfect full circle return to his roots in Cloverfield. He will work until his death to make you happy. He loves you. Come and enjoy him perform.