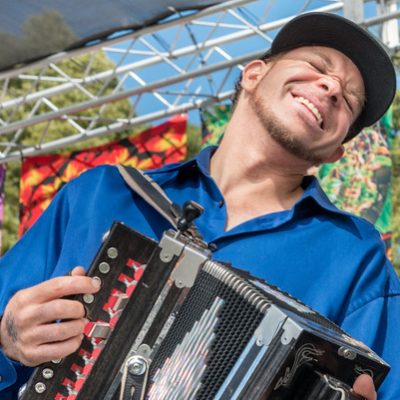 GRAMMY nominated Andre Thierry is a phenomenal talent who has been capturing the attention of other musicians and music lovers since he was a toddler. His French Creole heritage is deeply rooted in Louisiana although he was born and reared in northern California.

Andre is a virtuoso on all the accordion types, single row, double row, triple row and piano key. He effortlessly moves across types to deliver an energetic two-step, hard-driving blues or a blend that is his own alternative Creole sound. Although Andre’s instrument of choice is the accordion he also displays talent on bass, guitar and keys. Thanks to his parents and grandparents he sings traditional songs in original Creole French. He is a gifted composer and song-writer and his music and CDs feature many of his original tunes.

In his 30’s, he has already been deemed a legend. There is widespread agreement that Andre Thierry is an exceptional multi-dimensional musician who has a finely-honed ability to merge his Accordion Soul sounds with blues, r&b, jazz, latin and rock. His musical mastery enables him to create a unique sound for his and future generations while staying true to the past.