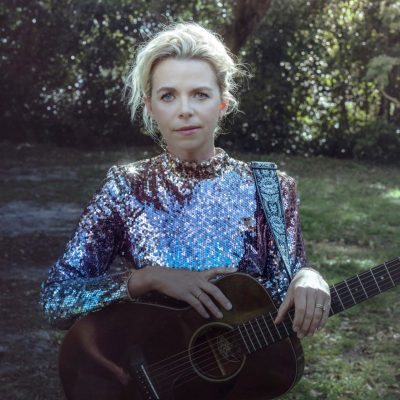 Reflection, remembrances, and self-reckoning combine on Aoife O’Donovan‘s third solo album, where her gift for tantalizing poetry is woven into a soundscape more rich and vivid than any she’s created before.

Age of Apathy is an album that traces a journey through grown-up life and ponders the question facing both singer and listener alike: what do you want from yourself?

The 11 tracks on this record came together in an extraordinarily fertile few months, sparked by O’Donovan’s move out of New York in September 2020.

Transplanted to the lush forests of central Florida, O’Donovan found something she’d never known before: the time and space to craft an album away from a packed performing schedule and the rigors of the road.

She is, however, aware of the irony. After all, this burst of creativity emerged from — and often charts — the malaise that dogged her at the start of the pandemic, and which had its origins long before.

From its hypnotic opener this album unfolds like a lifetime journey, following a breadcrumb trail of memories from youth to middle age. It’s a recognition of our frustrations and frailties, the implacable receding of our own past, and a sometimes anxious interrogation of the future.

He moved from Toronto to New York City, ready to take a break from the heavy touring schedule of Fish & Bird and to find himself in a new setting. He survived by singing and playing clawhammer banjo in the subway, turning heads with covers that leaned more Motown than hoedown.

Some friends started to wonder when, if ever, his solo album would be finished. Eventually, Brooklyn producer Alec Spiegelman (Cuddle Magic, Ana Egge) helped finish the initial sessions and helmed the recording of 6 new ones at his studio. Jacob Blumberg, who engineered the first sessions, was brought back to do the final mix, and shares co-producer credit. The result is a love letter to this time of Taylor’s life; an ode to the devastating, ecstatic, gritty, sexy decade of his twenties, woven together through his 5-string banjo with the help of 18 different musicians from the Brooklyn music scene and all across the U.S. and Canada.