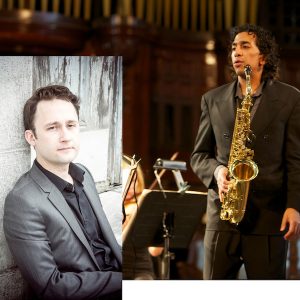 Ashu has established an extraordinary ability to communicate with audiences around the world through his charismatic and emotive performance style, and is one of today’s most engaging and distinctive young artists.

He has developed a trailblazing career as the first and only full-time concert saxophone soloist. Ashu has repeatedly defied conventions by winning major international awards traditionally won by pianists, violinists, and singers.

Critics have described him as “just as much fun to watch as to listen to” (Washington Post) and “ready to cultivate the masses” (Chicago Tribune).

Pianist Alexandre Moutouzkine has toured throughout Germany, France, Spain, Russia, Italy, China, Japan, and North and South America. He has claimed top prizes at the Naumburg, New Orleans, Cleveland, Montreal, Iturbi, and Arthur Rubinstein international competitions, among others, and was a winner of Astral Artists’ National Auditions.

“Moutouzkine’s kind of talent has an impact on his surroundings…[he gives] clarity to his musical choices, but heat to the conviction behind them.” (Philadelphia Inquirer).

Order in advance online or by phone, or purchase at the door beginning at 4:30 pm.