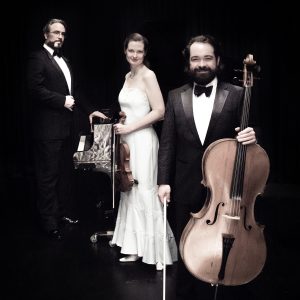 Founded in 2003, the award-winning ATOS Trio strives to convey the spirit of string quartet playing to the piano trio realm.  Never shying from extremes, the ensemble aims to push limits when it comes to sound and dynamics and is known for its honesty of interpretation.  Around the globe, the Trio is hailed by audiences and met with critical acclaim.

The Trio is one of the very few German piano trios who perform internationally on a regular basis at such venues as Carnegie Hall, New York; the Concertgebouw, Amsterdam; Wigmore Hall, London and also appears at noted festivals all over the world including Budapest Spring, Cheltenham, City of London, Enescu in Bucharest, Ludwigsburger Festspiele, Rheingau Musikfestival and Schleswig-Holstein.

ATOS has won the Kalichstein-Laredo-Robinson International Trio Award, the gold-standard prize for trios in the US, as well as prestigious recognition as “New Generation Artists” by the BBC.

Tickets may be purchased online in advance or at the door.