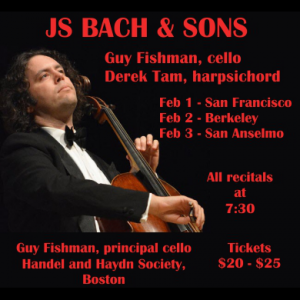 At this concert, you will hear superb musicians Guy Fishman, cello and Derek Tam, harpsichord play delightful music of JS Bach and his sons including both duets and solo works.

While the music of Johann Sebastian Bach represents the pinnacle of the Baroque period, several of his sons were composers as well (Carl Phillip Emanuel, Wilhelm Friedemann, and Johann Christian) and with their music they broke away from the baroque emphasis on counterpoint (multiple melodies at once) and laid the foundation for the Classical period that reached its pinnacle with the music of Mozart. Bach’s sons were innovators and musical adventurers.

Israeli-born cellist Guy Fishman is active as a concerto soloist, recitalist, chamber musician, and orchestral player. He is principal cellist of Boston’s Handel and Haydn Society. Fishman’s cello was made in Rome in 1704 by David Tecchler.

In demand as a conductor and historical keyboardist, Derek Tam performs regularly in the Bay Area and elsewhere. A specialist on historical keyboards, Tam has been called “a master of [the harpsichord]” (San Francisco Classical Voice)

Tickets are available in advance online ('Tickets' link above) or by phone.
Available at the door (cash only). 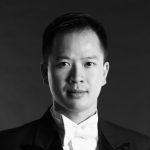 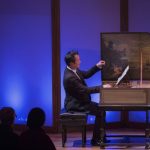