Be Natural - with filmmaker Pamela B. Green 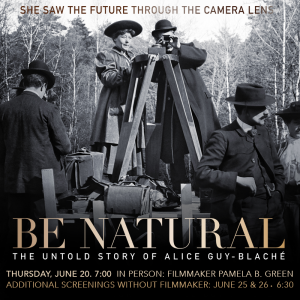 Director Pamela B. Green presents a screening of her acclaimed documentary

When Guy-Blaché completed her initial short film in Paris in 1896, she also became one of the first in history to make a narrative film.

Over an illustrious 20-year career, she produced 1,000 movies, and then she veritably disappeared from history…until now.

IN PERSON: FILMMAKER PAMELA B. GREEN