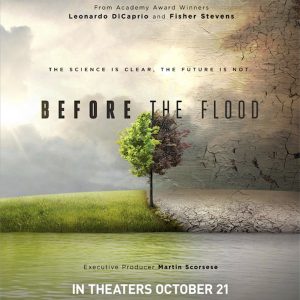 In conjunction with the Climate Change Summit gathering in San Francisco between September 14-16, 2018:

The Dominican Sisters invite you to join us in learning more about the implications of climate change on our earth community and our role in responding to this crisis.

There will be a series of three Monday Night Movies on different topics that offer us information on three affected areas.

Before the Flood:  This epic documentary follows Leonardo DiCaprio as he travels the world to examine firsthand the effects of climate change, and to learn more about possible ways to prevent catastrophic damage that could make the Earth unsustainable for human life.

During his journey, he speaks with such influential figures as President Barack Obama, Pope Francis and tech innovator Elon Musk, and makes a speech before the United Nations calling for greater action on this issue.