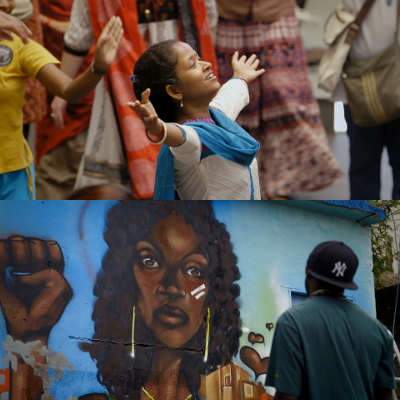 Documentary profiling four women artists from around the world

This inspiring documentary takes its title from U.S. suffragist Alice Paul’s comment, “The movement is a sort of mosaic. Each of us puts in one little stone.”

Filmmaker Sophia Kruz profiles four women artists, each using her own experience and talent to help construct the mosaic for women around the world in original, creative ways.

As these women help others, they acknowledge the drawbacks and challenges: a broken marriage, time away from a child, the lack of opportunity for a romantic life, being taken advantage of by a greedy manager. For now though, none of these creative, courageous and committed women would want things any other way. —Sara L. Rubin

The San Francisco Jewish Film Festival is the first and largest Jewish film festival in the world. Presenting innovative film each summer in the Bay Area, the festival promotes awareness, appreciation and pride in the diversity of the Jewish people.