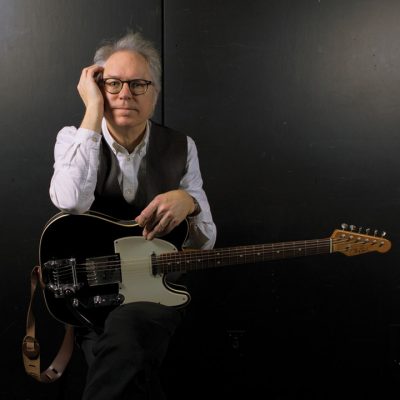 Bill Frisell’s career as a guitarist and composer has spanned more than 35 years and many celebrated recordings, whose catalog has been cited by Downbeat as “the best recorded output of the decade,” including his recent albums for Savoy – Sign of Life with the 858 Quartet, Beautiful Dreamers, All We Are Saying, a collection of John Lennon interpretations and his debut release for OKeh/Sony Masterworks, Big Sur, featuring music commissioned by the Monterey Jazz Festival and composed at the Glen Deven Ranch in Big Sur, for strings, guitar and drums in a quintet comprised of long-time musical associates.

Frisell’s latest album for Okeh/Sony When You Wish Upon a Star, a project that germinated at Lincoln Center during Bill’s two-year appointment as guest curator for the Roots of Americana series. Jazz Times described the project as follows: “unforgettable themes are the real draw here, reconfigured with ingenuity, wit and affection by Frisell and a terrific group.”

Thomas Morgan has been a steady presence in New York’s bustling jazz scene for nearly two decades, sports a discography dozens of discs deep, and has worked with numerous jazz heavyweights—but perhaps his work with guitarist Bill Frisell has brought Morgan the most attention. Frisell describes Morgan’s stellar bass accompaniment best: “Thomas has this way of time-traveling, as if he sees ahead of the music and sorts it all out before he plays a note. He never plays anything that isn’t a response to what I play, anticipating me in the moment.”