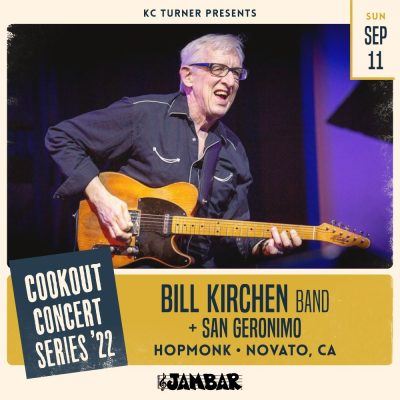 An evening of live music with the Grammy-Nominated guitarist, singer and songwriter!

Bill may be the only person to have, in a single year, stood on stage and played with both Ralph Stanley and Elvis Costello. He has spoken at the Smithsonian Institution in Washington, DC as part of the “Electrified, Amplified and Deified – The Electric Guitar” exhibition and also at Rensselaer Polytechnic Institute in Troy, New York. He was interviewed on the national TV special “Yesterday and Today: Honky Tonk & Western Swing” at the Broken Spoke in Austin, TX, where he performed along with Hank Thompson and Doug Sahm. Bill currently finds time to teach workshops at Jorma Kaukonen’s Fur Peace Ranch in Pomeroy, OH.

Q: Is this show outdoors?
A: Yes. This event is held in HopMonk Novato’s Beergarden concert venue.

Q: Are kids allowed?
A: The shows are all ages. Kids need a ticket to attend. No Babies in arms please.

Q: Is it seated?
A: General admission seating is first come. The Hillside section is opening seating. You’re allowed a LOW-BACK chair or blanket to sit on in the grass area. At the top of the hillside section there is table seating that is first come. We recommend arriving at the time doors open.