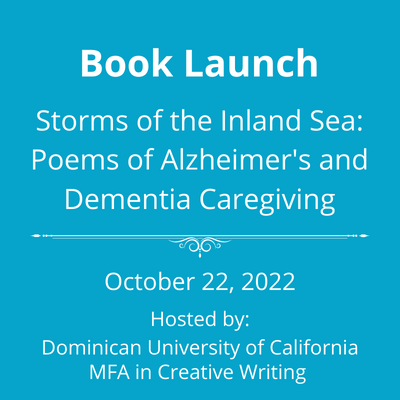 Join Dominican University of California‘s MFA in Creative Writing Program in celebrating Storms of the Inland Sea: Poems of Alzheimer’s and Dementia Caregiving, edited by Margaret Stawowy and Jim Cokas and published by Shanti Arts.

This long-overdue and unique poetry anthology is the first to address the caregiving aspect of Alzheimer’s and dementia.

Our poets span the nation and various walks of life, including prison inmate, physician, nursing home staff, ministers, professors, and of course, friends, sons, daughters, partners, and spouses. This in-person reading will include poets from the San Francisco Bay Area and beyond.

Come hear poems that address the reality of caregiving from the horrendous to the hilarious. Through the art of poetry, this anthology aims to support health providers and caregivers who fight (or have fought) the caregiving war each and every day.

Margaret Stawowy was a primary caregiver for her mother who suffered from dementia for more than five years. She is a librarian and longtime member of Marin Poetry Center where she served on the Board for six years, two as Chair. Her book Keeper of the Pond was released by Conflux Press in 2017.

Jim Cokas is a visual artist and poet who found himself immersed in his father’s care during his years moving through Alzheimer’s. He’s published numerous limited edition broadsides. His work is collected by the University of Arizona Poetry Center as well as other institutions, and has appeared in numerous exhibitions nationwide.

Please register through Eventbrite. Registration is encouraged. All registrants will be entered in a drawing to get a free copy of the book. To make a donation to the MFA Scholarship Fund visit our site here.

This creative writing event is a service to the public and there is no charge for participating. Dominican University of California is a nonprofit institution. 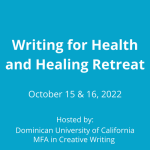 Presented by Dominican MFA in Creative Writing at Streaming Arts 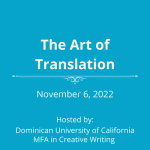 The Art of Translation