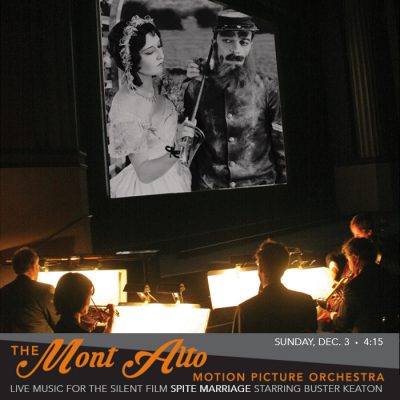 LIVE ORCHESTRA! We’re thrilled to welcome back the talented musicians of the Mont Alto Motion Picture Orchestra to accompany Buster Keaton’s Spite Marriage (1929), Keaton’s final silent before the talkies took over, screened in a 35mm print!

Spite Marriage stars Keaton as a lovelorn fan obsessed with a stage star played by Dorothy Sebastian. When she impulsively decides to take a husband to make her former lover jealous, Buster happens to be in the right place at the right time. But it’s going to take an encounter with smugglers, some dangerous stunts and incredible acrobatics before the happy ending can come along.

The feature will be preceded by a hilarious comedy short from the silent era. Program approximately 90 minutes plus post-screening discussion.

Based in Louisville, Colorado, the members of Mont Alto Motion Picture Orchestra enrich the silent film experience with authentic music of the era, performing under the direction of Rodney Sauer, who compiles and arranges the scores. Mont Alto made their Bay Area debut the same week that the restored Rafael opened in April 1999, and they have returned several times over the years.

The New York Times wrote “The results are often breathtakingly beautiful and always in the strict service of the film on the screen.”