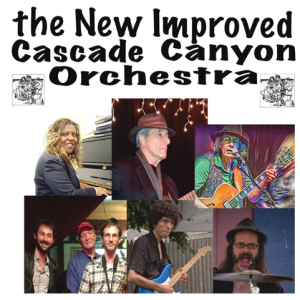 New And Improved, the CCO presents, Dee Spencer on Keyboard, one of the most talented and versatile musicians ever. And she can sing!

On drums we have Elvis Johnson. Along with Bob Keast on bass, both play with a number of other local bands as well.

At present on vocals and lead guitar, TNICCO features Jimi James, an exceptional guitarist and singer as well as song writer. Jimi plays many venues around the bay. We performed at the Sausalito Blues Festival, where Jimi headlined one of the Friday night concerts. He has played with John Lee Hooker and many bands around the Bay Area.

And featuring Sausalito Slim one of the most talented and exciting performers in the Bay Area and, really, you have to see it to believe it.

We recently added a horn section with Kyle Somers on sax and Luke Weidner on trumpet. Young brilliant and charming, they bring a whole new direction to the Cascade Canyon Orchestra.