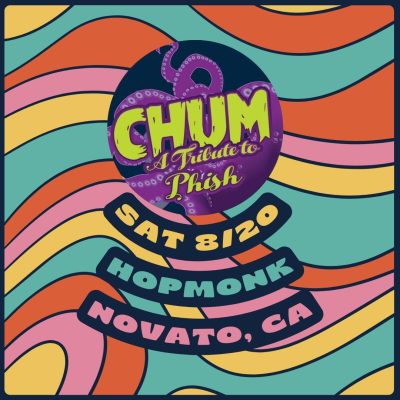 When Chum played their first live date in December of 2010 on a rainy Tuesday night in North Beach, nobody in the band knew what to expect.

As longtime Phish fans, Eric Schiff (guitar), Alex Bowman (drums), John Greene (keys) and Chad Weiner (bass) knew that they would be excited to see a band playing Phish music at intimate venues and so they bet that there was a sizable group of fans just like them.

To judge from that first show and subsequent shows around San Francisco, it’s clear they were right.

What started as three guys getting together just to see if they could ever make “Stash” sound anything like it ought to has turned into the Bay Area’s only Phish Tribute Band.

Even if there weren’t a crowd around, Chum (a name the band chose to reflect their humble approach to its mission), would still be playing every week in their studio, debating intricate parts, fine-tuning tone, and sweating out improvisational exercises in order to better understand how their musical heroes do what they do so well.

“The great thing about Chum is that they don’t take themselves too seriously. It’s a bunch of guys who love Phish and can play the hell out of so many songs we love. Who wouldn’t want to walk in and hear a live “Reba” in a tiny bar!?”, says Emilie Golenberg, host of Phish related blog This Week On Lot.

The boys in Chum hope you’ll agree and we look forward to seeing you at our next show.