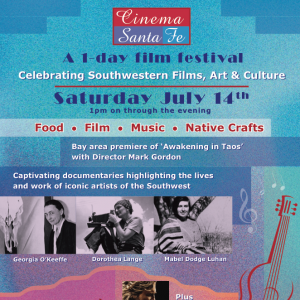 Join us for a one-day film festival celebrating Southwestern films, art and culture.

Day passes available for purchase, or come to individual film of your choice!

Awakening in Taos is an award-wining documentary film about the extraordinary life of Mabel Dodge Luhan, an influential, independently wealthy writer, salon hostess, patroness of the arts and catalyst for cultural change.

Inspired by the native culture and distinctive landscape of Taos, New Mexico she promoted a vision of social transformation. She promoted the vision of this ideal by inviting to Taos many famous and iconoclastic artists, writers and social activists.

Mabel’s associates were, in her own words, “the movers and shakers” of the early 20th century. Her list of guests included D.H Lawrence, Georgia O’Keefe, Willa Cather, John Collier, Marsden Hartley, John Marin, Thornton Wilder and Carl Jung among a host of many.

MEMORIES OF MISS O’KEEFE: This short documentary shares intimate reflections from generations of the Lopez family, who worked for Georgia O’Keeffe in northern New Mexico in her later years.

A WOMAN ON PAPER: Commemorating the 100 year anniversary of Georgia O’Keeffe‘s brief tenure in Columbia, South Carolina, this documentary tells the little known story of O’Keeffe’s experiences while teaching at Columbia College. The program details how the work she created during this period would be the foundation for her entire career and was pivotal to her development as one of the most significant modern artists of the 20th Century.

RETURN TO RAINY MOUNTAIN: Santa Fe filmmaker, Jill Momaday tells the story of her father, Pulitzer prize winning author and poet N. Scott Momaday. It is a personal account of his life and legacy told in his own voice, and in the voice of the filmmaker. Momaday speaks of his Kiowa roots, family, literature, oral tradition, nature, identity, and the sacred and important things that have shaped his life. Q&A WITH DIRECTOR

Grab a Hunk of Lightning

Grab A Hunk of Lightning, narrated and directed by Dorothea Lange’s granddaughter, award-winning filmmaker Dyanna Taylor, tells the compelling story of the passion, vision, and drive that made Lange one of the most important documentary photographers of the 20th century.

While Lange’s haunting image The Migrant Mother is one of the most recognized photographs in the world, few know the full range and depth of Lange’s work or the suffering and sensitivity that drew her to empathize with the people she photographed. Grab A Hunk of Lightning brings the wide scope of Lange’s work and sensibility to the screen.

Bad Blake is a broken down, hard living country music singer who’s had way too many marriages, far too many years on the road and one too many drinks way too many times. And yet, Bad can’t help but reach for salvation with the help of Jean (Golden Globe Nominee Maggie Gyllenhaal), a journalist who discovers the real man behind the musician. As he struggles down the road of redemption, Bad learns the hard way just how tough life can be on one man’s crazy heart.