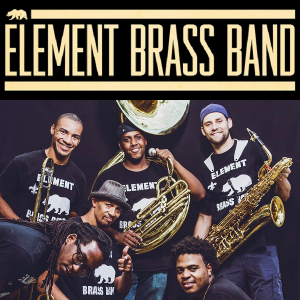 Gather your friends and family, grab your lawn chairs and picnic blankets, and Join Novato Parks & Recreation for this FREE outdoor concert series held outside City Hall on the Civic Green

E.B.B. are one of the premier bands on the West Coast for New Orleans Second Line. The band recently released their second album, “Cali Got A Brass Band” on Mardi Gras of this year.

Element have toured New Orleans, New York City and Atlanta, and have performed at many venues including the High Sierra Music Festival, Guitarfish, the Fillmore, the New Parish, The Boom Boom Room, and Ace Of Spades. E.B.B. have opened for GZA of the Wu-Tang Clan, Blackalicious, Andy Frasco, The California Honeydrops, Turkuaz, Big Sam’s Funky Nation, A Tribe Called Red, Angelo Moore of Fishbone, Jellybread, and many others.

Element has twice been given the accolade of ‘Best in Jazz’ at the Sacramento Music Awards, and their momentum shows no signs of slowing down. Join the Element Brass Band at Mr. Tipples’ Recording Studio on June 30th as they bring you an authentic New Orleans dance party!