Concert on the Green: Decker 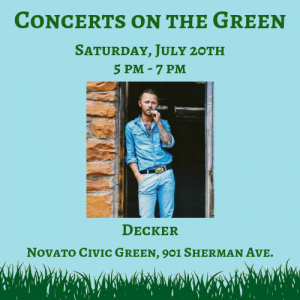 In the simplest terms, decker. is a singer-songwriter based in Sedona, Arizona. However, a more apt description would be musical mystic.

He, himself, describes his sound as “psychedelic desert folk,” drawing inspiration directly from the vortexes of the red rock mountains and canyons where he resides—an area so widely renown for its cosmic energy that millions of spiritual travelers flock there every year in an attempt to harness its power.

With a handful of self-released recordings to his name that have garnered praise from KEXP, Magnet Magazine and No Depression among others, decker. signed with revered independent label Royal Potato Family in 2017 to release a 10-song retrospective entitled ‘Into The Red.’

In 2018, he returned with a full-length collection of new material, ‘Born To Wake Up.’ Where previous albums have leaned darker in mood and content, this latest finds him maturing in his artistic viewpoint, offering glimpses of optimism and light across a range of songs like “Awake,” “Burnin Grass” and “The Matador.”

“decker is one of the country’s most criminally underrated songwriters.” – Glide Magazine