Concert on the Green: Kingsborough 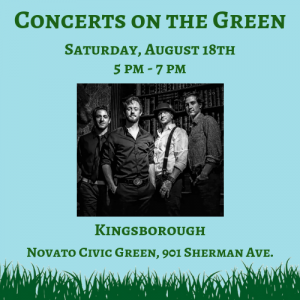 Forged from the soul and tradition of rock n’ roll legends before them, Kingsborough breathes new life into the music that has inspired generations.

As an emerging band from the San Francisco Bay Area, their raw high-energy performances and powerhouse vocals have made Kingsborough a standout among their peers. They seduce with their rhythm-heavy rock n’ roll mixed with soulful harmonious instrumentation and storytelling lyrics.

No Depression hails: “The vintage elegance of Kingsborough’s music sets an endearing reminiscence of boundless regularities that has been altered to appeal to an ever-changing musical audience.”

Building a reputation for an incomparable live concert experience has lead Kingsborough to perform at BottleRock Napa Valley, opening for Joan Jett and being awarded the opening slot with ZZ Top at the sold out Wells Fargo Center in their hometown Santa Rosa, CA.

BAM magazine describes their performance as “rocking it like the big boys used to… in the same way that Springsteen has always done.” Front man, Billy Kingsborough, has once even been described as being “Joe Cocker’s soul re-incarnated”.