Concert on the Green: ROEM 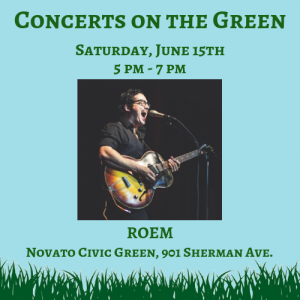 ROEM (Roem Baur) is an award-winning singer and touring songwriter from San Francisco.

He is known for appearances on season 7 of NBC’s The Voice, the main city stage at Super Bowl 50, official SXSW & CES conferences, to shows in Canada, Netherlands, Germany, England, Zimbabwe, Africa and more.

His trademark “wild” (Entertainment Weekly) stage show and “ridiculous vocal range” (rslblog.com) has garnered praise from fans and critics all over the world.

As a young boy he discovered his love of singing in a gospel church, and continued singing in high school, then college as a classically-trained first tenor, winning multiple awards in Musical Theatre. After college and a brief stint as a professional stage actor, Baur took the leap to rock n’ roll. That leap, which began with just a voice and an acoustic guitar in humble living rooms, cafes, and small clubs, grew to forming a band, and through a chance encounter, releasing his first studio EP with GRAMMY nominated producer, Damien Lewis.