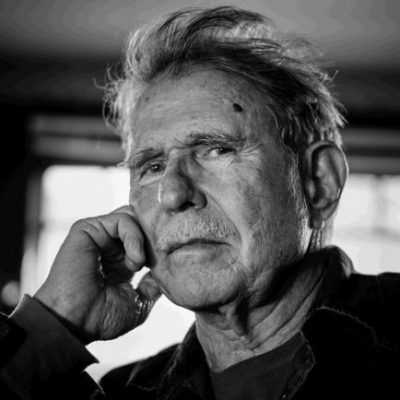 Country Joe McDonald straddles the two polar events of the 60s — Woodstock and the Vietnam War. In 1965, he and Barry Melton co-founded Country Joe & the Fish, which became a pioneer psychedelic rock band. Their first record was released in 1965, in time for the Vietnam Day Teach-In anti-war protest in Berkeley, California. He sang one of the great anthems of the era, “I-Feel-Like-I’m-Fixin’-to-Die Rag,” to an audience of a half-million at the Woodstock Arts and Music Festival in 1969.

McDonald’s music spans a broad range of style and content. He began his solo career with a collection of Woody Guthrie songs. He went on to produce a musical rendition of the World War I poems of Robert Service, a collection of country and western standards, “Vietnam Experience” in 1985, “Superstitious Blues” in 1991 with Jerry Garcia, and an album of songs about nursing in 2002. In 2007 he put together a song-and-spoken-word one-man show about Woody Guthrie, and followed it up with another about Florence Nightingale.

After 48 albums and more than four decades in the public eye as a folksinger, Country Joe McDonald qualifies as one of the best known names from the 60s rock era still performing. He travels the world and continues to sell records.