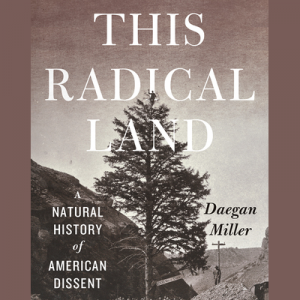 Daegan Miller visits Point Reyes to discuss his fascinating history of the interplay between environmentalism, empire, and social justice

About This Radical Land

That’s largely how we still think of nineteenth-century America today: a country expanding unstoppably, bending the continent’s natural bounty to the national will, heedless of consequence. A country of slavery and of Indian wars. There’s much truth in that vision.

But if you know where to look, you can uncover a different history, one of vibrant resistance, one that’s been mostly forgotten.

This Radical Land recovers that story. Daegan Miller is our guide on a beautifully written, revelatory trip across the continent during which we encounter radical thinkers, settlers, and artists who grounded their ideas of freedom, justice, and progress in the very landscapes around them, even as the runaway engine of capitalism sought to steamroll everything in its path.

Here we meet Thoreau, the expert surveyor, drawing anticapitalist property maps. We visit a black antislavery community in the Adirondack wilderness of upstate New York. We discover how seemingly commercial photographs of the transcontinental railroad secretly sent subversive messages, and how a band of utopian anarchists among California’s sequoias imagined a greener, freer future.

Working in a tradition of everyday radicals stretching from Thoreau to Rebecca Solnit, Miller offers nothing less than a new way of seeing the American past–and of understanding what it can offer us for the present . . . and the future.