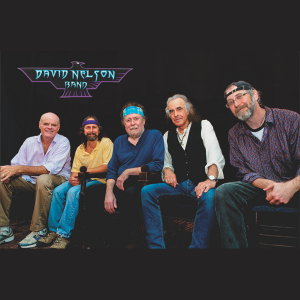 The David Nelson Band has been recording and performing around the country since 1994. Their broad musical palette spans the Almost Acoustic style that Nelson played with Jerry Garcia, through roots rock n’ roll and country-rock, to full blown psychedelic, jazz tinged space jams.

These stylistic elements, combined with plenty of spontaneous free form improvisation, create a sound that is uniquely David Nelson Band. Though the original songs are mostly written by Nelson, the development of all the material is a fully collaborative effort.  The Nelson, Sless, Siegel, Sears, Molo Band as a name is a bit cumbersome – though in reality, that’s what they are.

David Nelson – guitar/ vocals – is a founding member of the New Riders of the Purple Sage and long time musical partner of Jerry Garcia’s dating back to 1962 in the pre-Grateful Dead bluegrass band, The Wildwood Boys. Nelson was also a member of the Jerry Garcia Acoustic Band and performed on three Grateful Dead albums – Aoxomoxoa, Workingman’s Dead & American Beauty – playing the character laden electric guitar solo on Box of Rain. Nelson has also performed as a member of Phil Lesh and Friends.