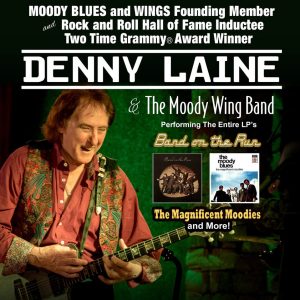 As a premier English songwriter and multi-instrumentalist, Denny is best known for his roles as the original Guitarist and Lead Singer of THE MOODY BLUES from 1964 through 1966 and as the co-founder of WINGS with Paul McCartney. Denny was one of three constants in WINGS, along with Paul and Linda McCartney from 1971 through 1981.

At the height of the British Invasion, Denny Laine was one of the most recognizable voices on the music scene. “No guitarist was more integral to Paul McCartney’s post Beatles career than Denny Laine.”
– Gibson Guitars

Denny departed THE MOODY BLUES and formed THE ELECTRIC STRING BAND, writing the hit Say You Don’t Mind, and opened shows for Jimi Hendrix in London. Denny joined the bands BALLS as well as GINGER BAKER’S AIR FORCE, singing lead on the memorable Man of Constant Sorrow. Throughout his career, Denny has also worked with various members of The Beatles, The Who, Led Zeppelin, Cream, ELO, The Zombies, The Hollies and many
more.

DENNY LAINE & The Moody Wing Band perform highlights from the Band on The Run and The Magnificent Moodies albums…and more. In April 2018, Denny was honored with the induction into the Rock and Roll Hall of Fame® as a founding member of THE MOODY BLUES. DENNY LAINE & The Moody Wing Band travel across America performing classic WINGS and MOODY BLUES hits as well as his new material.