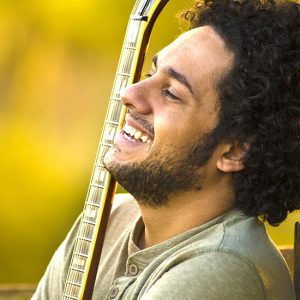 Diego Figueiredo (pronounced fig-a-ray-doe) is a new star of the guitar world.

He is only 37, and he has released 23 CDs, 3 DVDs, and he has played in more than 60 countries around the world. He is the winner of several important competitions including The Montreux Jazz Competition, and the VISA Prize.

Diego is now presenting his new concert “From Classical to Jazz.” It is a fusion between Jazz, Bossa Nova and Classical music. Diego has a unique interpretation, with tremendous techniques, enormous emotion, and his shows have been a great success to all audiences.

Diego Figueiredo was born in Franca, Brazil, in 1980, and at the age of 4, he used to strike poses carrying his small guitar. At six, he got a mandolin, which was kept in a very special place in his house. Diego played many instruments before choosing the electric guitar when he was twelve, playing in theaters and local pubs, revealing the great art of improvising and harmonizing. At 15, he conquered theaters and nightclubs in many different Brazilian states, playing solo or with renowned musicians.  Besides being a guitar player, Diego is a producer, arranger, orchestrator, and multi-instrumentalist.

Having received awards twice at the Montreux Jazz Festival as one of the greatest guitarists in the world, Diego Figueiredo performs one amazing concert after another.  Diego has recorded and performed with big names like Gilberto Gil, João Bosco, Roberto Menescal, Toquinho, Belchior, Fafá de Belém, Angela Maria, Toninho Horta, Larry Coryell, Ken Peplowski, Lewis Nash, John Clayton, Cyrille Aimée and many others.