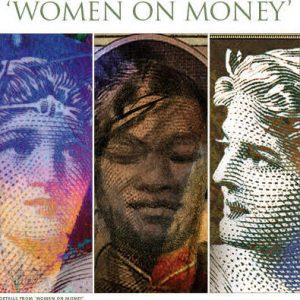 Fine art prints on the theme of Women On Money by Don McCartney at Tiburon Town Hall.

Don’s fine art prints are informed by a long career as a graphic designer. Working for publications has provided access to vast resources of visual and editorial material, some of which led to his most recent works.

Combining original watercolors and drawings with typography and other scanned images, he creates a digital collage, using Photoshop. The resulting images are output as permanent pigment prints on paper, canvas or aluminum.

Don graduated from Ringling College of Art and Design in Sarasota, Florida with honors and a B.A. in Commercial Design, thriving in a curriculum of life drawing, studio and plein air painting, commercial design, illustration, perspective, lettering and art history courses.

Following Ringling and a year spent at a design studio in St. Louis, Don ventured to San Francisco. There, he landed a job as a production artist in the art department of Rolling Stone magazine. This led eventually a 25-year stay as senior designer and art director at the Hearst Corporation-owned San Francisco Examiner & Chronicle. Leaving the Chronicle in 2002, he has continued to work as an independent contractor, with clients ranging from ballet to booze and beyond.