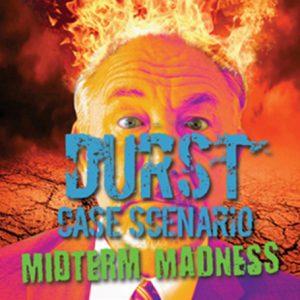 Fresh from the national tour of his award-winning, comedic chronicle of the changes in America during the Time of Trump, Will Durst is proud to present his new solo outing “Durst Case Scenario: Midterm Madness.”

Nominated by Theater Bay Area for Outstanding Solo Play, DCS: MM is a rollicking feast of outrage and outrageousness as up-to-date as the latest 4am Oval Office tweet.

In this lightning-paced, 85-minute comedic tour de force, Durst celebrates the one year anniversary of Trump’s ‘Reign of Error’ by analyzing where we are, how we got here and what possible destinations lie ahead.

Equal parts comedy and therapy, the intrepid “Dr. Durst” assists audiences in overcoming their PTSD: President Trump Stress Disorder, by isolating the farcical and sticking pins into the ludicrous. For sufferers who never thought they’d laugh again, DCS: MM is a sanity-preserving prescription.