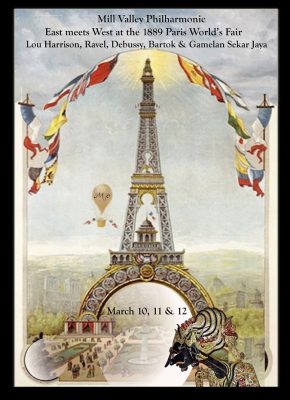 In 1889, in Paris, the City of Light, the world came to Paris and Paris became the world, from China to the Americas, from Congo to Russia. At the Java exhibit, the model village (kampong) demonstrated all aspects of communal village life including gamelan music ensembles. French composers Debussy and Ravel encountered gamelan music for the first time and were profoundly inspired and influenced by this music of bells, gongs and drums.

All MVP concerts are free, with walk-in seating.  Everyone is welcome.

Béla Bartók: from the Island of Bali & String Quartet IV

Dates, Times and Venues for East meets West at the 1889 Paris World’s Fair:

For more information go to millvalleyphilharmonic.org or call 415.383.0930

All concerts are free. Walk-in seating.