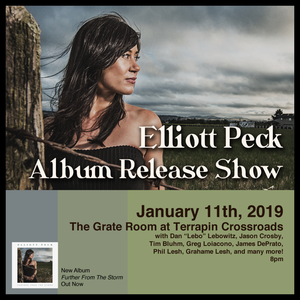 Singer-songwriter celebrates the release of her debut solo album

She will perform two sets of music in the Terrapin Crossroads Grate Room, showcasing songs from the new record and some classic favorites as well.

The all star lineup for the night will include: Phil Lesh, Dan Lebowitz, Jason Crosby, Tim Bluhm, Greg Loiacono, James DePrato, Grahame Lesh and more to be announced!

“Phil Lesh has always pushed me to think outside the box,” says Peck. “I’ve adopted his policy of trying to keep things surprising, keep them interesting, keep them weird. There’s comfort in writing a song and being done with it, but I’ve learned from Phil not to be afraid to go back and rethink things and experiment with different sounds and progressions.”

The end result is a record that defies expectations while still managing to feel warm and familiar. It’s an invitation to dig deeper, to push below the surface in the search for honest expression and pure emotion. Even if you’ve never heard her sing a note before, Peck sounds like the kind of songwriter you’ve been listening to for years, and as she embarks on her newest chapter, it’s clear that she’s the kind of songwriter you’ll be listening to for years to come, too.