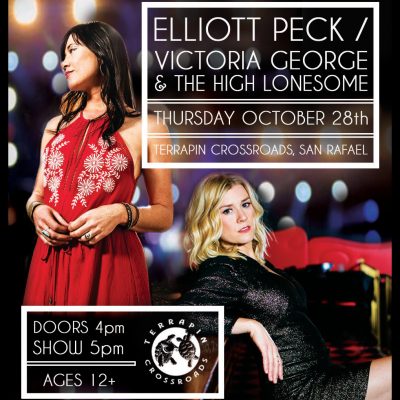 One of the most sought-after vocalists on the West Coast, Elliott Peck has made a name for herself lending harmonies to everyone from Phil Lesh and Bob Weir to Jackie Greene and Reid Genauer.

As a member of the band Midnight North, she’s appeared on bills with the likes of Bonnie Raitt and The Mother Hips and slayed festivals from Lockn’ to Hardly Strictly Bluegrass.

Now, with her mesmerizing solo debut, Peck is stepping center stage, ready to prove she’s a talent more than worthy of the spotlight on her own.

Music biz folks have indeed taken notice throughout the years. Victoria has worked in and outside of Nashville’s finest publishing houses and shared bills with the likes of Brandi Carlisle, the Doobie Brothers, Steve Earle, Delta Rae and other industry names that speak for themselves.