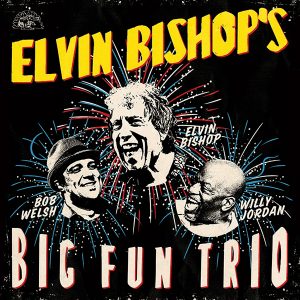 Father’s Day BBQ on the lawn!

Elvin Bishop has been traveling the Blues road longer than most, and he’s got the stories to prove it.

His long and varied career has included plenty of side trips along the way as well, from deep down gutbucket Blues played in smoky South Side Chicago taverns, to raucous roadhouse R&B, to good time Rock & Roll on concert stages and festivals around the world.

And at every stage along the way, he’s instilled all of his music with passion, creativity, and a healthy helping of wisdom, wit, and good humor.

Elvin Bishop’s Big Fun Trio is among his very best musical ideas ever. The music is rootsy, spirited and soulful, performed by serious musicians hell-bent on having a good time.

The Guitarsonists are a burning new 3-guitar blues band in the Bay Area. With players this versatile it would be near impossible for any guitar fan to come away disappointed.

Chris Cain’s jazz-tinged, blues soaked guitar and deep, warm vocals have the maturity and authenticity of bluesmen many years his senior. He has been playing since the age of eight and has become an institution on the Bay Area blues scene.

Daniel Castro is one of the most dynamic blues guitarists performing in the West Coast. Heavily influenced by blues greats such as Albert King, B.B. King and Albert Collins, Castro grew up in LA and cut his teeth in the blues clubs in the South Central area. After moving to San Francisco in 1995, he has been a local mainstay with his own Daniel Castro Band.

Mighty Mike Schermer was a fixture on the Bay Area blues scene for over 20 years. Over the years Schermer has become a go-to sideman for legends such as Elvin Bishop, Bonnie Raitt and Maria Muldaur. 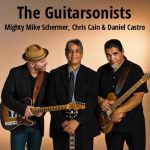