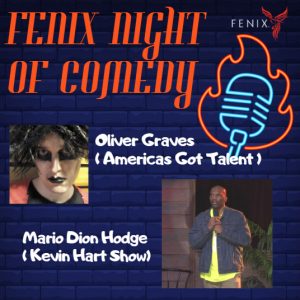 Come on down for a Night of Comedy at The Fenix highlighting some of the bay area’s hottest comics.

Oliver Graves is a “goth” comic. His look certainly isn’t deceiving. His style of humor lends to the dark and deadpan aspects of comedy. Delivering dry one liners as well as just being a bit absurd. Oliver’s more subdued style lends well to a relaxed atmosphere. Fitting in very well to a setting that’s more intimate.

Jason Cole is a Bay Area native who started his stand-up comedy career in late 2016 and has been working his way up through the ranks ever since, and is already close to surpassing 500 sets. Jason’s rapid fire, take no prisoners style focuses on finding humor in dark and taboo topics while also mixing in healthy doses of silly jokes and self-deprecation.

Growing up in Hayward, Sean Boyles has 27 years of club and touring experience as a drummer, in small, unsigned original bands, from a wide range of genres, but mostly metal and hard rock. Just over a year ago, as if life and playing in 5 bands currently didn’t keep things busy enough, Sean started doing stand up comedy, quickly making some waves with a raw and aggressive style. He’s become a regular at Tommy Ts, and has performed at Cobb’s, San Jose Improv, Rooster T Feathers, and plenty of dive bars and bowling alleys.

There is a $15.00 per person minimum at the Fenix during the shows