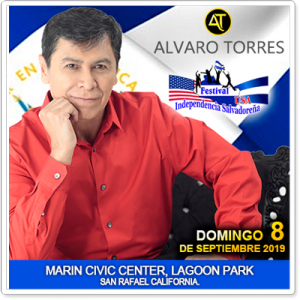 SC Production International presents the Festival Independencia Salvadoreña 2019, which celebrates the traditions and customs of El Salvador, in order to join the Salvadoran community in an atmosphere of harmony and respect, cultivating the cultural values of El Salvador with other Latin American communities in the USA, so that our children do not forget their cultural roots.

The Festival pays homage to the Salvadoran celebration which commemorates the independence day of the country.

Featuring the top bands of El Salvador: Alvaro Torres, Jhosse Lora y Espiritu Libre, Sonora Dinamita, Mr. Pelon503. It will be a spectacle for the audience.

The Festival will feature food and beverages, as well as cultural arts, crafts, exhibitors, and sponsor displays.

Food concessions will focus on the Salvadorian cousin, including pupusas and chicken on the grill. The best in Salvadoran beers and other beverages will ensure a good time for all.