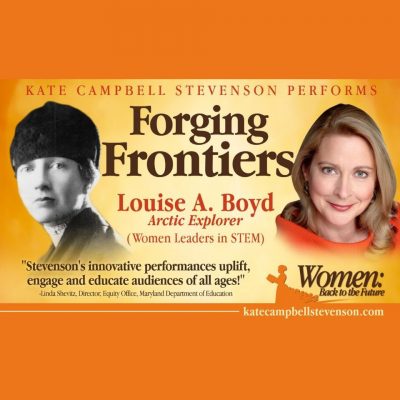 In 2005, Stevenson started her Boyd research journey in San Rafael, then to The American Geographical Society Archives in Milwaukee, Wisconsin. Discovering more of Boyd’s Arctic story led Stevenson full circle, back to the National Archives in Washington, DC and Adelphi, MD, fifteen minutes from her Silver Spring, Maryland home.

Miss Boyd (a distant relative of Stevenson) was a force to behold and led not one, not two, but seven arctic expeditions from 1926 through 1941, yet most people outside of San Rafael do not know her name.

Boyd’s bold courageous example — daring to step out into new territory almost a century ago — inspires today’s audiences to Forge their own New Frontiers.

Kate Campbell Stevenson, singer, actor, and producer, performs her musical theater productions nationwide to educate, motivate and elevate audiences with dynamic real women’s stories who have changed the course of history. Ms. Stevenson has starred in over 30 Broadway musicals produced in regional theaters throughout the U.S.