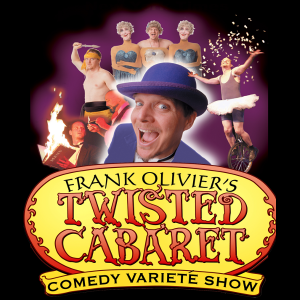 The theater is packed, but the tour bus with all the performers has broken down. Now Frank Olivier must pull off the show of his life, and perform all sixteen acts himself, aided only by Flynch, his loyal hunchback assistant.

This one-man varieté show features a cast of a dozen characters, each more talented and demented than the last.  The Twisted Cabaret Friday the 13th Edition is a mad cap, fun-filled, comedic masterpiece.

“A one man reincarnation of vaudeville with a decided edge!” – San Francisco Bay Guardian

Frank Olivier has been seen on The Tonight Show, as well as America’s Got Talent, Ellen, and HBO’s Just For Laughs. He is a favorite at Seattle’s Moisture Festival, the largest comedy/varietè festival in the world. Long time fans cherish his act in the Broadway touring show Sugar Babies (with Mickey Rooney and Ann Miller).

Paul Nathan plays the role of Flynch. He’s been seen on HBO, MTV, and Star Trek Voyager, as well as in his own “I Hate Children Children’s Show”, voted best children’s show at the Edinburgh International Festival in Scotland.