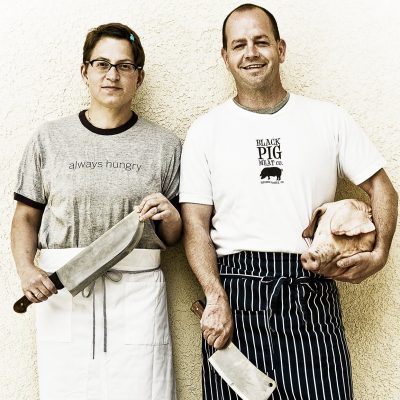 Chef Duskie Estes has competed twice on the Food Network’s “The Next Iron Chef” along with leading the staff at Zazu Kitchen + Farm in Sebastopol. The restaurant has been included in the Michelin Guide and been named among top regional eateries by the San Francisco Chronicle.

Chef Duskie and partner John Stewart produce salumi from their own Black Pig Meat Co., which has been honored by the Good Food Awards, and have appeared on the cover of Wine Spectator magazine.

Dave the Butcher is a longtime educator and customer favorite at Marina Meats, a San Francisco purveyor of organic meats, who has appeared at Eat Real Fest in Oakland and other events.

Tickets including dinner; wine will be offered by glass or bottle.