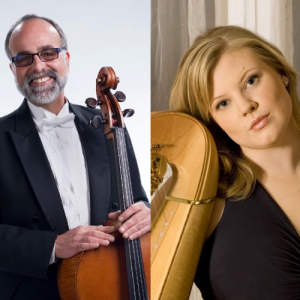 A member of the San Francisco Opera Orchestra since 1988, cellist Emil Miland is an acclaimed soloist, chamber and orchestral musician. He made his solo debut with the San Francisco Symphony at age 16, the same year he was selected to perform in the Rostropovich Master Classes at the University of California, Berkeley.

The San Francisco Classical Voice calls Meredith Clark an “emerging star harpist.” As a soloist, Ms. Clark has performed throughout the United States and took the international stage when she performed the Ginastera Harp Concerto at the Gewandhaus in Leipzig, Germany.

In demand as an orchestral harpist, Ms. Clark has performed as guest principal with the San Francisco Symphony as well as many other top symphonies in the Bay Area and with orchestras in Ohio, West Virginia, Indiana and Nebraska.

What is Friday Music & Morsels:

Enter our lovely, light-filled atrium. Sit at an intimate 4-seat cabaret table, which allows new and long-time friends a chance to meet, relax and connect. In the wonderful tradition of many European countries, enjoy an afternoon “dessert & coffee” (or tea)…with our compliments!

Then, sit back and bask in a terrific program featuring the artistry of great musicians. Each month will feature different musical and culinary treats

All reservations must be made by noon on the Wed, March 14th.
Early registration is encouraged as tickets may easily sell out well before the reservation deadline.