Presented by Alter Theater at 1200 Fourth Street (at B Street), San Rafael CA 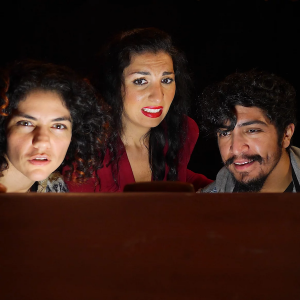 ​Drama queen Lola, do-gooder Sandy, and their hedonistic baby brother Bruno return to their parents’ home country to bury their grandfather. But he won’t stay dead!

A comedy about breaking the bonds of family trauma, secrets that won’t remain buried, and never feeling at home in any country that can claim you.

Continuing the company’s 15-year tradition of creating pop-up theater along downtown pedestrian shopping districts, Ghosts of Bogotá takes temporary residence of an empty storefront next door to longtime retail anchor Scandinavian Designs. Formerly a jewelry shop, 1200 Fourth Street is located right on the corner of Fourth and B Streets, directly across the street from Royal Ground.

“It’s a fantastic block–there are several restaurants, from CrepeVine to Amici’s, within a half a block, and Bahia Taqueria is one door down,” says AlterTheater artistic director Jeanette Harrison.

AlterTheater leaves the storefront windows clear, so that passersby on the street can look in and “window shop theater”. “It makes theater feel accessible and fun to people who might not normally think to go see a play,” says Harrison.

The space was formerly a jewelry store. “So far, we haven’t found any precious gems hidden in any cracks,” Harrison laughs, “but we can see in the back room the outline of where the safes used to be. It’s pretty cool.”