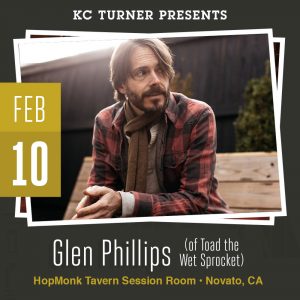 Glen Phillips is best known as the singer and songwriter of the alternative rock group Toad the Wet Sprocket.

Approaching 30 years as a band, Toad the Wet Sprocket released their first LP, Bread & Circus, about 25 years ago on their own, independent label, Abe’s Records.

A quarter of a century later, they are still making music on the same label and in the same spirit of unwavering independence. The band is thankful for the continued help and enthusiastic support of their fans, which serves as inspiration for the band to tour and play live.

Toad the Wet Sprocket share in the kind of musical chemistry that can only come from meeting in high school and writing, recording and touring on albums over the course time.

Beginning in 2001, 15 years after forming TTWS, Phillips began working on solo projects and releasing solo albums, as well as collaborating on other group projects such as Nickel Creek and Plover.

On April 2018, Phillips announced that he had signed with Compass Records Group. His recently released 2016 album, Swallowed By the New, was re-released on May 4, 2018, with a new bonus track: “Nobody’s Gonna Get Hurt.”