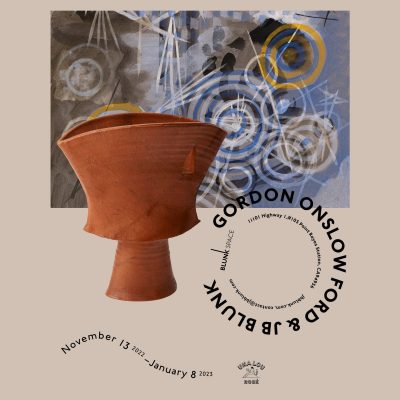 A rare selection of paintings by Ford and ceramics, paintings, and wood carvings by Blunk

The artworks span the 1950s and 1960s, the decades in which the friendship of Onslow Ford and Blunk developed.

The artistic practices of Onslow Ford and Blunk are deeply rooted in the natural surroundings of Bishop Pine Preserve, Inverness, California, where they both lived for nearly forty years, and to Japanese philosophy and aesthetics.

Onslow Ford studied Zen Buddhism with Alan Watts at the American Academy of Asian Studies and Chinese calligraphy for five years with Hodo Tobase Roshi, both in San Francisco.

At the same time, Blunk apprenticed with Japanese ceramic masters Rosanjin Kitaoji and Toyo Kaneshige, for three years in Bizen, Japan. It was their mutual friend, sculptor Isamu Noguchi, who introduced the two in 1955, shortly after Blunk moved to Northern California.

Onslow Ford enlisted Blunk to assist with the construction of his home in 1958, and subsequently offered Blunk a piece of land on Bishop Pine Preserve to build his house and studio. The result was Blunk’s masterpiece, a home that is a total work of art.

Blunk describes “this place here, the house, the outdoors, all around is…like a big sculpture.” It was during the construction process of his own home that Blunk began to work with wood.

The serving platter in the exhibition is an early example of an object he made for his home using salvaged wood. The first piece of wood furniture Blunk created was a chair gifted to Onslow Ford and his wife Jacqueline Johnson as a gesture of gratitude for the land.

These modest works in wood eventually led to large-scale public seating installations, including “The Planet” (1969) at Oakland Museum of California, and “Greens” (1978) at Greens Restaurant, San Francisco. Approaching the material as his guide, Blunk strove to discover the inherent shape or the spirit within the piece.

In her writing, Bogzaran explains that they each embraced art as a way of knowing, and furthermore, as a way of life.

Onslow Ford was profoundly connected with the land surrounding his home, a fertile ground for his creation for more than four decades (1958–2003). His philosophy and theory of art developed in Inverness, expressed in his book Creation (1978). The concept in his paintings, such as Inner Earth and Great Spaces of the Mind is informed by the sense of place where he lived.

Onslow Ford’s six decades of painting began with his early pre-surrealist work of landscape and seascape; leading to his surrealist work, when he was part of the Parisian surrealist group (1938–1943); and finally, progressing into the development of his own cosmology by integrating his studies of philosopher P. D. Ouspensky and Eastern philosophy.

His black and white paintings of the 1960s are an expression of this new cosmology, what he explained as “an expression of the direct movement of the mind in stillness. […] For the painter-voyager in the inner-worlds time is governed by speed of awareness, and space is manifest in the painting.”