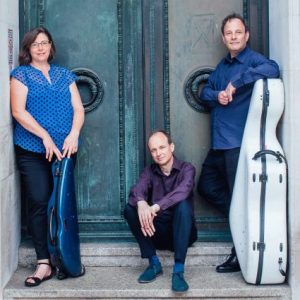 The Gould Piano Trio (Lucy Gould, violin; Richard Lester, cello; and Benjamin Frith, piano)  have been directly compared to the great Beaux Arts Trio for their ‘musical fire’ and ‘dedication to the genre’ in the Washington Post, and have remained at the forefront of the international chamber music scene for a quarter of a century.

Launched by their first prize at the Melbourne Chamber Music Competition in 1994, they were ‘ECHO Rising Stars,’ making a highly successful debut at the Weill Recital Hall in New York’s Carnegie Hall, and described by Strad Magazine as ‘Pure Gould.’

Commissioning and performing new works is an important part of the UK-based trio’s philosophy of staying creative and freshly inspired. Renowned British composer and pianist Huw Watkins composed a new work for the Gould Piano Trio and Robert Plane and they gave the premiere of ‘Four Fables’ at the Three Choirs Festival in Hereford on July 31st 2018. It has already been performed ten times in the UK and will be performed in Mill Valley on January 26.

Robert Plane has tirelessly pursued a particular passion for British clarinet. His Gramophone Award-winning account of Finzi’s Concerto and Gramophone Award-shortlisted Bax Sonatas being just two of a large collection of recordings of works by the great English Romantics. Robert is principal clarinet of the BBC National Orchestra of Wales and has held the same position with the City of Birmingham Symphony Orchestra and Royal Northern Sinfonia.

Order online or purchase at the door beginning at 4:30 pm 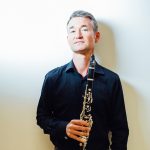