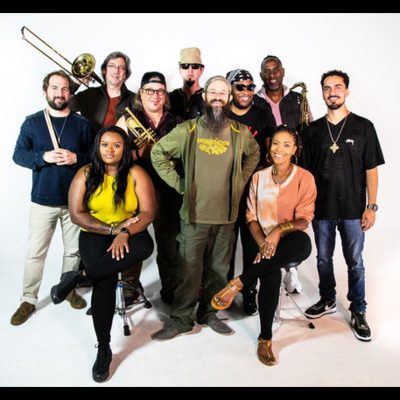 Roots reggae with dub influences, with reggae-dub DJ before and after

Groundation is an American roots reggae band with jazz and dub influences, from Sonoma County in Northern California.

First formed in 1998  Groundation returned in 2018 after a 3 year hiatus; debuting accomplished new members, brand new music and that true to form improvisational Reggae/Jazz experience. A unique sound fans have enjoyed for two decades on the biggest stages all over the world.

Their new album “The Next Generation” which won Reggae.fr’s “Best Roots Album” from over 16,000 press, radio, and fans around the world has struck a chord as a groundbreaking musical achievement. Since the album’s release in October 2018 the group has performed across the globe from countries such as USA, Italy, France, Uk, Brazil, and Argentina.

DJ Sep will be spinning before and after Groundation.

DJ Sep is a long-time Bay Area DJ/producer, and the founder of Dub Mission, one of the longest-running Reggae clubs in the world (1996-2019). She has performed at many festivals, clubs, alternative venues, museums, and private events. She spins dub, reggae, dancehall, bass, Jungle/DnB, and Afrobeats.

For 22 years, Sep was also on Bay Area radio, first on the legendary college radio station KUSF, and later on Berkeley’s public radio station, KPFA. She has spun in London, Vancouver, Tijuana, many cities in the U.S., and most clubs in the greater Bay Area. Sep has presented and opened for a long list of reggae and electronic artists, including Lee Perry, The Scientist, Mad Professor, Sly & Robbie, Toots and The Maytals, Mungo’s Hi Fi, Adrian Sherwood, Tippa Irie, The Wailers, Quantic, Prince Fatty, Akae Beka, Hollie Cook, DJ Vadim and many others. She has performed both solo and as Dub Mission Sound System with various MCs and musicians.