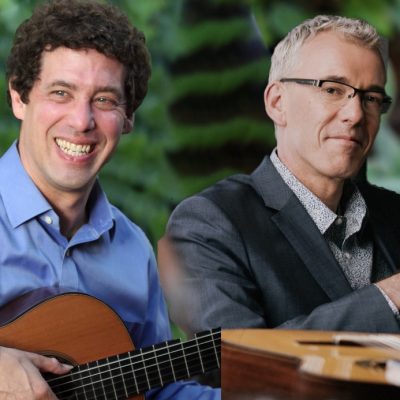 Classical guitarists who have performed across U.S. and abroad as soloists and in ensembles

The guitar duo of Marc Teicholz and Michael Partington will perform in the 17th season of the Guest Concert Series at Dominican University of California, at Angelico Concert Hall, Sunday afternoons at 3:00 pm. Free parking is available in the nearby Conlan Center lot off Grand Avenue in San Rafael.

Teicholz is currently on the faculty of the San Francisco Conservatory of Music and California University East Bay.

Partington is Artist-in-Residence and director of the Guitar program at the University of Washington in Seattle.

All Guest Concert Series concerts are free to the following:
- Students under the age of 18 (including middle school and elementary school children if accompanied and supervised by an adult, not intended for ages 5 and younger)
- Community college students with a valid I.D.
- Music and art teachers in grades K-12
- Dominican students, faculty, and staff with a valid I.D.

Single-event tickets (available only at the door 30 minutes prior to scheduled performances):
$18 - general admission
$15 - seniors over 60

There will be a reception with light refreshments following the performance.