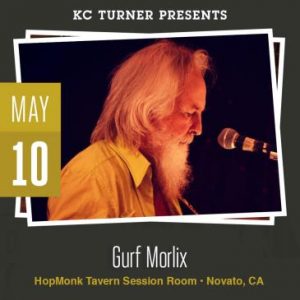 There was a time, and not that long ago in the grand scheme of things, when Gurf Morlix didn’t really think of himself as a songwriter.

A guitar player, sure — armed from the get-go with the dead-aim chops and cool-handed confidence of a natural-born gunslinger. Later on, he took on the mantle of producer, too, parlaying his myriad strengths as an ace sideman into an equally lauded career helping a veritable who’s who of the most formidable poets in Americana find their “growl” and cut their deepest grooves on record.

But songwriter? That handle took him a bit longer to fully embrace.

“I came to realize over many years that it’s really hard, and you don’t settle until you have it as perfect as you can make it,” he says of the craft. “When I hear a John Prine song and every syllable and every word is perfect, and it sounds so simple that it’s like a Hank Williams song, I know that Prine doesn’t knock those songs out in 20 minutes.”

As far as Morlix’s music goes, the impact of that awakening is perhaps most readily apparent at his shows. By his own admission, Morlix used to be “deathly afraid” of meeting and talking to audience members after a show, and even more reticent to reveal too much about what his songs were about while playing them onstage, preferring for listeners to come up with their own interpretations. But not anymore. “My show is a lot more confessional than it ever has been before,” he says. “I do a lot of storytelling, and I’ll talk about my heart attack or whatever else I’m thinking at the moment, and it’s really been working.”